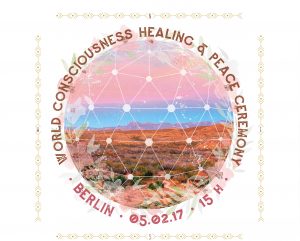 The Old Saying: ‘Only Ghosts Walk these Streets’…. became a reality when we arrived at Breitscheidplatz. Berlin. Our intention: to assist in the clearing of traumatic human experiences that can and do create stuck negative energy as well as Souls!

This is what SFR terms ‘An Unhealed Site’…. we have termed this NON-PROFIT Process – The CLEANSE SITE PROJECT! Our group of experienced healers, energy workers and those that have an ability to see beyond the veil all assist in this process. As well as individual citizens from all walks of life.

A short heart warming story follows after the video…:-)

Blog: After I made a general overview of the site and met with our team…. we were 6 and the guests were around 56 people who answered the call….I knew that we had some real work to do. There were many spirits ,who once were people, hanging around – they had not gone to the light. The effects of WWI & WWII created a layer of dense energy …. something similar to what a negative portal feels like. Just before we started I said to myself, it is a shame that there are not some English people here… as this would make the ceremony even more powerful. I am myself half English and my Grandfather was a WWII pilot, however, I thought this influence to not be enough to make the balance that I deemed necessary.

5 minutes before we began an English couple, let us say in their mid to late 50ies/early 60ies, arrived and seeing what we were about to do asked to take part. The ceremony was underway and suddenly another English woman joined the circle, as we found out later, she said that she was just passing through the square on her journey back home to England and came looking for a hot chocolate. She saw the circle and felt drawn to what we were doing. When she found out she joined directly. This was the balance we needed and is the magic of ceremonial work!!! 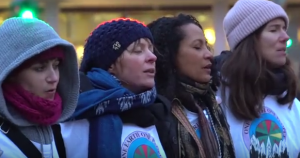 For 2 hours 60 of us stood in -2 Celsius and did the work that we all felt called to do! It was powerful, selfless and it worked! Blessings to the power of the human heart and the integrity of our fellow sisters and brothers for showing up and giving some love(service) to humanity!

If you would like to join a Cleanse Site Ceremony please feel free to check out the Cleanse Site Project page under INSTITUTE!

Do you know HERstory? 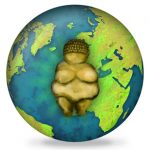 Check out MiraMichelle’s Video talks on Nature or attend one of SFR’s Ceremony Events. Or…simply get inspired! Check out our videos here!

Angela’s Feedback on a Ceremony