For thousands of years we women have been weaving the Web!

We are all weaving our webs all of the time either consciously or unconsciously. What are we weaving and where are we going? Perhaps a look at how our ancestors weaved us here can help us to determine what we are really moving towards and weaving into existence.

During the Neolithic and Paleolithic eras we women wandered upon the earth collecting indigenous plants, fruits, nuts and berries to nourish our collective family or ‘Matriclan’. We understood and respected the importance of sharing the weight and responsibility of earthly survival. Every member of the clan had their role to perform to obtain this much sought after existence and each person in the clan was valued for their participation and nurtured by the collective.

It is now understood through the science of Paleoanthropology and Paleomedicine that women were only able to bear children every 4 years. These same women provided 70% of the food source in most of the early gatherer/hunter societies. Therefore, debunking the present day image of the weak vulnerable female surrounded by children who were dependent on the nourishment derived from the male hunt. “Today we know that the still widespread assumption of a continuously pregnant woman with many children around her and therefore weak, helpless and completely dependent on taking refuge in the “father”- is an ideological fairy-tale…”(1)

Hence, grew the early civilizations of the fertility goddess who symbolized the fertility of NATURE. These early tribes prospered through the direction of female leadership. This leadership is not to be conceived of in the conventional patriarchal sense but instead more focused upon the characteristics of bonding and the ritual/ceremonial central role of the mothers. 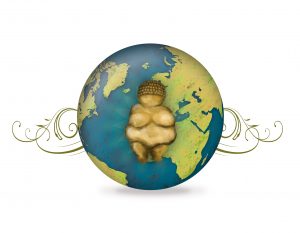 Paleoanthropology has proven that the egalitarian system of organization was the norm in the Paleolithic era. This was inclusive of a sharing collective system. They resonated towards female leadership due to what developed naturally around them. The bulk of the food source was supplied by the female, her ability to give new life to the tribe (thus to populate thereby providing for the tribe’s survival – even though the Paleolithic gatherers did not desire many children as their later Neolithic agriculture relatives did – this would have led to poorness). This by no means was considered a utopian society. It was a society geared towards survival. Yet, these early civilizations thrived and prospered much earlier than originally believed as seen in the latest sensational archeological find in South Western Germany last year, “This figurine was produced at least 35,000 calendar years ago, making it one of the oldest known examples of figurative art. This discovery predates the well-known Venuses from the Gravettian culture by at least 5,000 .years and radically changes our views of the context and meaning of the earliest Palaeolithic art.“, and they did so with a much greater equality and peacefulness than once understood.

During the past 30 years there has been a dramatic reassessment of the sequences of rating time. The first signs of the agricultural revolution began to appear as far back as 9000 to 8000 B.C.E. – more than 10,000 years ago. “The first anthropomorphic religion, focusing on the worship of the Goddess, now evolved into a complex system of symbols, rituals, and divine commands and prohibitions, all of which found expression in the rich art of the Neolithic period.”(2)

If we look to the civilization of Old Europe between 7000 and 3500 B.C.E. we see that the early Europeans developed complex religions and social institutions. Marian Gimbutas reports, “Old European locations were chosen for their beautiful setting, good water and soil, and availability of animal pastures. Vinca, Butmir, Petresti, and Cucuteni settlement areas are remarkable for their excellent views of the environs, but not for their defensive value. The characteristic absence of heavy fortifications and of thrusting weapons speaks for the peaceful character of most of these art-loving peoples”.(3)

Sites such as Catal Huyuk and Hacilar show no signs of warfare for a time span of over fifteen hundred years. Archaelogical evidence indictates that male dominance was not the norm. There is no evidence that supports a superiority of either sex. The findings from the excavations of grave sites show that there was hardly any difference in ‘wealth of equipment’ between the sexes.

Four important arguments in the case of a necessary reinterpretation of the social systems during the Paleolithic era.

1.) The primordial original Freedom, Autonomy, Independence, Responsibility of women, sexually as well as economically, was given by NATURE! Which has been proven by natural sciences and sociobiology.

2.) The consequences of this Nature-given independence of women as the “owners” of the mystery of birth made them the ‘mistresses’ or ‘priestesses’ not only of human birth and death, but also of the sacred ceremonies which are united to the renovation and reproduction (the FERTILITY) of NATURE and the plant and animal LIFE.

3.) The RITUALS celebrated by the male hunters were different. They were connected to the KILLING of living animal-creatures, borne by the SACRED MOTHER and were always connected with an apology for bloodshed.

4.)The ‘SPIRITUAL LEADERSHIP’ or perhaps a better term would be the ‘CEREMONIAL RESPONSIBILITY’ for the THANKSGIVING to the Sacred Mother, this SACRED OFFICE of the women together with their COLLECTIVE Independence and their economic predominance, made women the backbone of their Matriclan. Nevertheless they maintained (despite the nature-given INEQUALITY of human individuals – who are all unique and different) a SOCIAL EGALITARIANISM. (4) 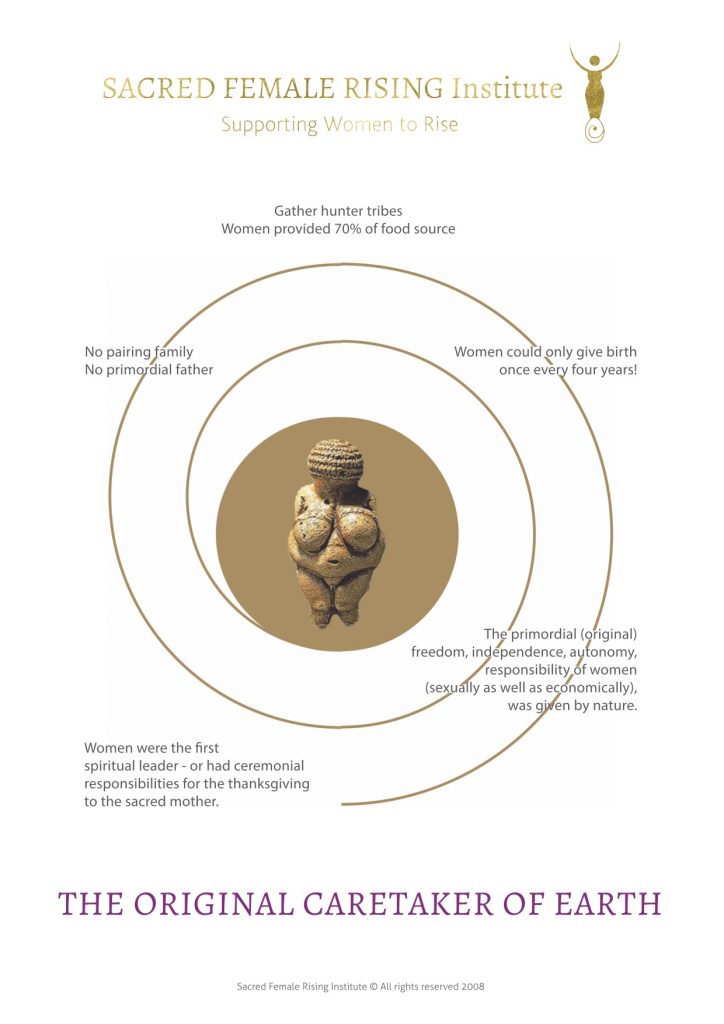 I believe we must begin with a clear view of the past that is not colored through the subjective and sometimes limited perspectives of patriarch indoctrinated scientists. We must endeavor to give the archeological findings of this era a fresh and unbiased point of view. The facts are clear – thousands of statues have been found that represent the Divine Feminine as the supreme deity and life giving force of the people who lived and thrived during the Paleolithic and Neolithic times and continues to this day. One such example is the Madonna or ‘Mother Mary’ or as multitudes of people have named Her for thousands of years, ‘The Great Mother’. The primordial father god is a myth. Due to the evolutionary situations of the time and the needs of the people and their development it would have been virtually impossible for a father god to have been created at that time.

What significance does all this have upon our present society and what can we learn from our ancestors? What was this system that created these supposed societal levels of equality? Why did their systems not seem to oppress, enslave, exploit or disenfranchise their people? As Gimbutas writes, “the world of myth was not polarized into female and male as it was among the Indo-Europeans and many other nomadic and pastoral peoples of the steppes. Both principals were manifest side by side. The male divinity in the shape of a young man or male animal appears to affirm and strengthen the forces of the creative and active female. Neither is subordinate to the other: by complementing one another, their power is doubled.”(5)

The system of ‘might is right’ and the most powerful rule the weaker and look mostly for their own self interests – the pyramid ranking system – which is the one we presently live under in contemporary society – as I have eluded to in this discourse is not the only societal system that has been successful on our planet. The partnership societal system has also been prevalent on our planet – albeit, has of late mostly been dominated by the male ranking hierarchical system, it does still exist in many small collective societies across our globe and was very successful in past cultures the most recent larger example being Crete. The facts from the Neolithic and Paleolithic eras lean towards the reality that the partnership model of social organization was the way our species first tended to organize ourselves – which came from our natural understanding of the world around us and how we naturally were inclined to treat one another. “A history of the Paleolithic suggests a culture that existed for at least 50,000 years and had as its central figure the Great Mother, who implanted in the minds of the ancestors a culture of art, a love of life, a belief in the afterlife, a symbiotic relationship with plants and animals, and a deep respect for the natural cycles of women.”(6)

It has become time for us to realize and then to materialize a new societal system which leans more towards ‘partnership’ and less towards ‘authoritarian ranking’. In my highest of hopes I see our world collectively working towards this level of balance – from within ourselves and externally of ourselves.

Thank you
With Love,

“The Sacred tradition, be it in relation to the food supply, the mystery of birth and propagation, or of death, arose and functioned, it would appear, in response to the will to live here and hereafter.” (7)